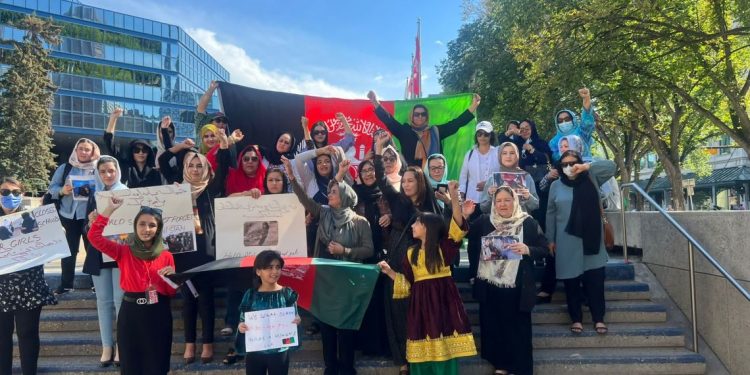 Some women assembled to protest the misogynist policies of the Taliban on the first anniversary of the fall of the country to the Taliban in Canada and asked the international community not to recognize the Taliban and to break their silence regarding the Taliban’s actions.

This protest assembly titled “In mourning of August 15, the black day of the fall of the country and the return of the Taliban group” was held on Friday, 12, August by women activists of the civil society who migrated to the city of Calgary, Alberta, Canada after the fall of Afghanistan.

One of the participants is Ms. Sheila Qayyumi, who tells Nimrokh: “It has been a year since the Taliban terrorist group entered Afghanistan and took over power with the agreement they had with the United States. They deprived all the people of Afghanistan, both men and women, especially women and girls, of their basic rights. Women have been denied the right to work, the right to education, and even the right to be human. Taliban assassinates and kills every day and tortures people under various excuses, poor people try to escape and leave the country.”

She added: “We ask the international community to never recognize this group and put pressure on the Taliban till a government that benefits all people be established in Afghanistan through a free election. There must be changes in Afghanistan so that people’s lives can be normalized.”

Although many reasons can be mentioned as factors in the fall of the Afghan government, the vague and unclear agreement between the United States of America and the Taliban in Doha is considered a serious factor in the fall of the government on August 15, 2021. A series of these causes and factors have now faced Afghanistan once again with a crisis of domestic and global legitimacy. This fall has finally resulted in the isolation of the country and the collapse of democratic structures and has put the lives of citizens in a completely critical situation. In the past year, the citizens of the country have been deprived of the most basic citizenship rights, such as the right to political participation, the right to work, the right to move, and the right to education. Meanwhile, women and girls have faced the main deprivation and like other citizens, their social, cultural, and civil liberties have been explicitly violated.

Ms. Vajma, another participant in this gathering, told Nimrokh: “We gathered to protest the collapse of women’s rights because of the first anniversary of the presence of the Taliban in Afghanistan. Women have not had any rights in the past year, and girls who have not been going to school for a year have stopped studying. Women are not allowed to work, of course, they are deprived of their social, political, and civil rights.”

Closure of free media and freedom of speech, lack of civil space for human rights activities, lack of justice and law, blocking of justice and judicial institutions, removal of the government structure and three branches, systematic and unjustifiable discrimination against women, and religious and ethnic groups. Committing war crimes, genocide, and forced migrations, the concentration of power in religious and even regional circles within the Taliban group, lack of responsibility towards citizens, and killing people under the name of civil activists, democracy promoters, former regime employees, and accusations such as connection with ISIS and espionage are some of the unfortunate consequences of the Doha agreement and the Taliban regime’s rise to power, which has been holding our oppressed people hostage for a year.

It is while, poverty, economic collapse, capital flight, forced migrations, and natural disasters also harm the oppressed people of Afghanistan.

Mrs. Rubina Hamdard also says: “We gathered here to talk about the concerns of the Afghan people, especially women and girls, and their concern is that they do not have access to their basic rights such as education and work, and they cannot even leave the house alone. Afghan people are struggling with many problems such as poverty and hunger, we ask the international community to pay attention to these problems and not recognize the Taliban. There is still war and conflict in some provinces, and the Taliban issue new decrees to restrict women every day.”

The suffocating atmosphere in the country has caused not only a large number of educated scientific and technical personnel and human resources of the country to go into exile or live in a suffocating atmosphere, under the domination and authoritarian regime of the Taliban inside Afghanistan but also Afghan women, who as half of the society in the existence of traditional, discriminatory and misogynist beliefs throughout history, especially in the last two decades, had passed a difficult path despite corruption, conflicts and political instability, have lost their achievements in the past year. The reports of human rights organizations and research in the past year strongly show that the Afghan people have been victims again and the situation is a continuation of the wars and disturbances of the past five decades.

Ms. Fatemeh Kohestani told Nimrokh: “For the past year, the Taliban do not respect women’s rights, they are not allowing women to work and girls to continue their education. Fatemeh Kohestani also asks the international community not to recognize the Taliban until they fulfill the obligations of the Doha Agreement.”

At the same time, the world’s indifference and silence, especially the silence of the Islamic countries, while they know that silence against oppression is not permissible and watching the Taliban’s oppression against the citizens, shows that the world, especially the Islamic countries, has forgotten Afghanistan and all their reactions against this obvious oppression is reduced to a declaration and a slogan. We believe that to overcome this crisis and restore effective and legitimate governance, collective action is needed and compliance with international obligations. The action we are calling for is more than a declaration of solidarity or a moment of silence to condemn the Taliban. Therefore, it is necessary for world leaders and politicians; to apply diplomatic pressure and legal sanctions on the Taliban to start a constructive dialogue between the parties.

During the past twenty years, world leaders have made regional and international commitments in partnership with political institutions and civil organizations in Afghanistan. Now is the time for the world to stand with the citizens of Afghanistan who demand a political system based on the will of the people. Therefore, female protesters in the city of Calgary, Alberta, Canada, expressed their demands to the world leaders, regional allies, Islamic countries, and international organizations in the form of a statement.

The statement says: “Taliban are an ideological group, obvious oppression against women, depriving innocent children of the country of education; the unknown future of women and girls in the country are some examples of the fanaticism and radical thinking of the Taliban.”

Violence, clear violation of fundamental rights, extrajudicial killings, as well as the gradual and complete exclusion of women from the social, economic, political, and cultural fields are some examples.

Considering all these issues; Putting practical pressure on the leadership of the Taliban and exerting influence on countries that support the Taliban, such as Qatar and Pakistan, can be the key to breaking the lever of their totalitarianism. The end of wars in the country, the beginning of a permanent ceasefire, the end of the suppression of women’s protests, the release of protesting prisoners or those accused of opposing the Taliban, and freedom of speech should be the basic prerequisites for the Taliban. The female protesters mentioned in their statement: “We ask the United Nations, international institutions, countries that have supported Afghanistan in the past twenty years, Islamic countries and neighbors to ensure equal and inclusive participation of the country’s ethnic groups in the system, social justice, creating a system based on the will of the people, freedom of expression and respect for the rights and freedoms of women a precondition for recognizing the Taliban. Also, this group should be recognized after cutting its relation with other terrorist groups.”

Burqa Is not Only an Outfit

Women: Stop Forced Marriage, Women Are not Your Sex Slaves!