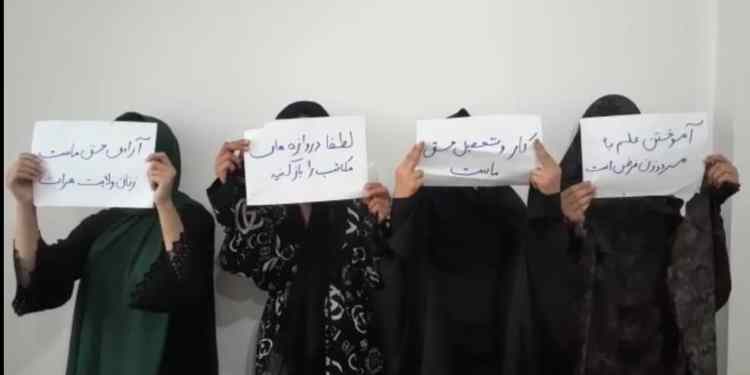 Following the protests of women from all over Afghanistan, several women from Herat province also protested against the Taliban.

The members of the women’s movement known as the “Spontaneous Movement of Fighting Women of Afghanistan” gathered in a closed place in Herat on Friday ( 12, August ) and illustrated placards demanding the reopening of girls’ schools by the Taliban.

On the placards of female protesters of Herat, these slogans are written “Work, Education and Freedom are our rights” and “Learning science is obligatory for every man and woman, open the school gates!”

These women also pointed out:

“After the Taliban takeover, we Afghan women were deprived of our most basic rights and confined in our homes. While thanking all of you who support the struggle of Afghan women, we sincerely ask you to make our voice heard.”

After the suppression of women’s protests in the streets of Kabul, women’s civil protests have been moved to unknown and closed places.

Yesterday, female protesters in Kabul announced in another protest gathering that “Our silence is obligatory not out of consent”.

They had also written on their protest placards “Cry out of oppression, comprehend us!”.

On the first anniversary of the fall of the country to the Taliban, female protesters once again took to the streets of Kabul and chanted: Food, Job, Freedom, but their protest was suppressed violently by the Taliban. The Taliban started shooting in the air to disperse the women’s protests.