In Remembrance of Death of Freedom of Speech 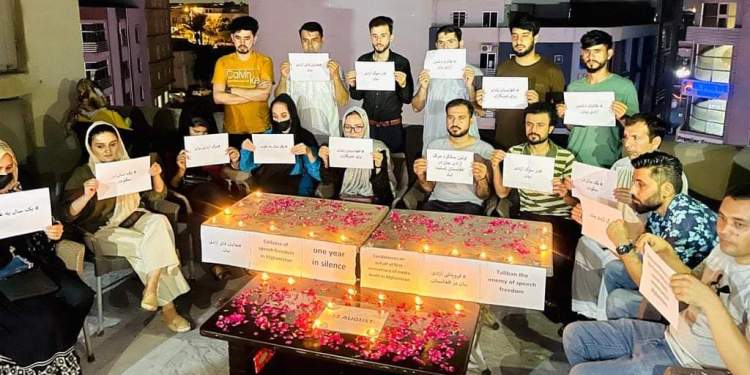 After the fall of the Republican system last year, media and freedom of expression were put in dire conditions by the Taliban group; which caused many media outlets to stop working and journalists to become unemployed or flee the country to survive.

The media that are still active are forced to broadcast according to the instructions of the Taliban. In many cases, the fighters of the Taliban group behave violently with the journalists. They try to limit the access to information, away from the supervision of media and journalists supporting institutions which strengthens the hegemony of this group.

According to the Reporters Without Borders (RSF) report, nearly 40% of the country’s media outlets have been closed and 60% of journalists have lost their jobs after the Taliban takeover.

According to this organization, female journalists have suffered the most and 76.19% of them have lost their jobs.

This organization also mentioned that since August 15, 2021, at least 80 journalists have been arbitrarily and violently detained for different periods by the Taliban security forces, especially by the Taliban intelligence.

Currently, three journalists are imprisoned in Afghanistan for no reason. Only one journalist has been sentenced. He is Khaled Qaderi, poet and journalist of Nowruz Radio in Herat, who was sentenced to one year in prison by the Taliban military court on May 7, 2022.

Another case that shows the violent behavior of this group with journalists; Yesterday, Saturday, 13, August, when journalists were set up to cover the women’s protest, which was held due to the closure of girls’ schools and other restrictions imposed by this group on women, they behaved violently with the journalists, and according to the sources, 10 journalists were arrested, female reporter (Tooba Valizadeh reporter of Tolo News) was also among detainees.

According to the sources, foreign reporters were also among the detainees who were released later, but the fate of Afghan journalists is unknown.