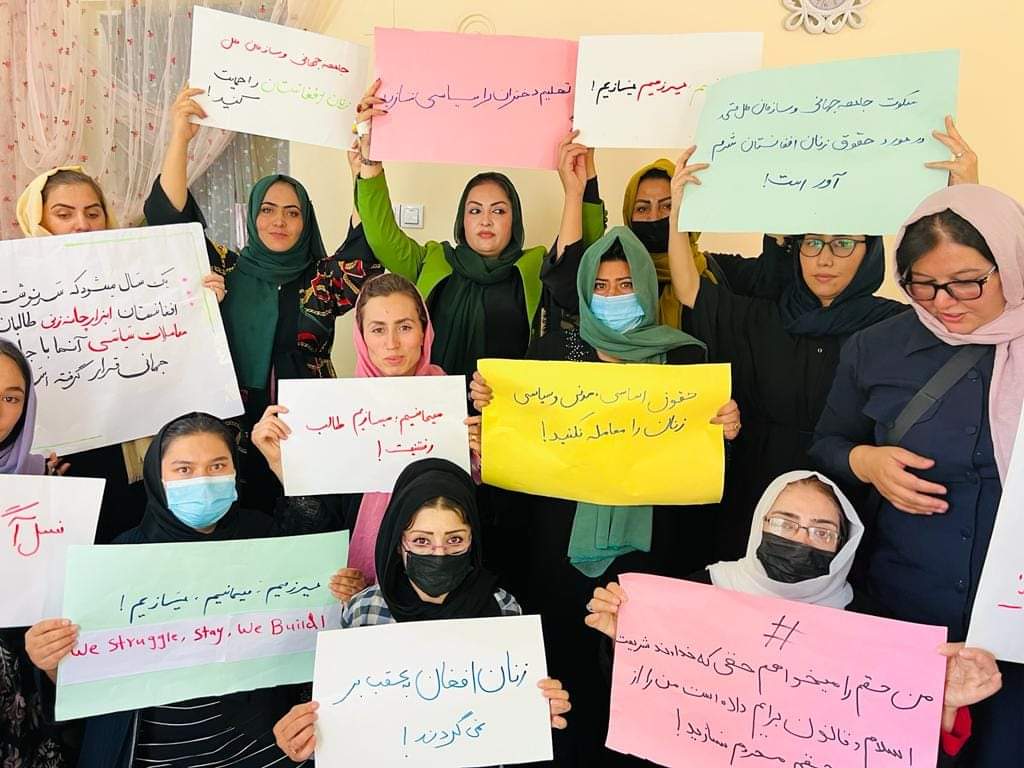 Some protesting women’s movements in Kabul called August 15th “Afghanistan Women’s Solidarity Day” by issuing a joint resolution, and emphasizing the joint and continuous struggle against the Taliban group while pointing out the violation of citizens’ rights by the Taliban.

This resolution was published by many of these movements today (Monday, 15, August) on the occasion of August 15th, the first anniversary of the fall of Afghanistan to the Taliban group.

Protesting women’s movements stated: “After the presence of the narrow-minded Taliban group, school gates were closed to female students without any religious, legal and humanitarian justification. Women’s protest movements and civil activists as Afghan people representatives have repeatedly called on the Taliban group to reopen girls’ schools.”

They demanded the reopening of girls’ schools and said: “We will not give up this demand for the rights of the Afghan people at any cost.”

These women said about women’s deprivation of the right to work, “After the occupation of Afghanistan by the Taliban group, thousands of women have lost their jobs, most of these women are the breadwinners and heads of their families, the deprivation of women from work and the prevention of employment in various fields have increased “Poverty and hunger” even worse this action of the Taliban group has pushed women to a humanitarian crisis.”

Therefore, they demanded practical and immediate measures regarding the presence of women in the political and social structure and said that they strongly support the demand for women’s right to work and will continue their civil struggles until it is realized.

Protesting women’s movements have also pointed out the systematic discrimination and widespread violation of human rights by the Taliban group: “We have witnessed human rights violations, convictions, and deprivations, deprivation of freedom, suppression of civil protests, restrictions on the media, depriving religious and ethnic minorities of their rights, participation, and restriction of religious groups, arbitrary arrests, tortures and violence by the Taliban group on different sections of people, especially women, the lack of human rights and the imposition of restrictions on women are not acceptable to the people of Afghanistan.”

They added: “Over the past year, we have witnessed gender, ethnic, linguistic, and group discrimination. Encounters have led to arrests, violence, beatings, and even murders. We demand to identify and prosecute the people who committed these inhumane and un-Islamic behaviors. Arbitrary arrests, acts of discrimination, violence, repression, and inhumane killings must be ended as soon as possible.”

Protesting women’s movements have condemned the Taliban’s violation of freedom of expression by suppressing journalists and imposing restrictions on the media.

In this resolution, it is stated: “Journalists of the media and the press are among the achievements of the people of Afghanistan, access to information is the right of independent media institutions and the citizens of the country. Imposing restrictions in the field of information and access to information, arresting and beating journalists, and imposing strict laws on women who work in the media are serious challenges, we want to solve the challenges facing the media and the press in the country.”

Female protesters have demanded the serious attention of the international community to deal with the Afghanistan crisis.

They have asked the United Nations, human rights organizations and donors, and countries that are influential in the affairs of Afghanistan, neighboring countries, and the region to “Not be indifferent to the demands and requests of the Afghan people, especially women, and to take serious and practical measures beyond conferences and publishing announcements.”

Protesting women’s movements have pointed to the suppression of women’s civil gatherings in Kabul by Taliban fighters and have emphasized the continuation of their civil struggles.

They also thanked all the justice-seeking and free citizens and aligned institutions inside and outside the country who have supported the protest movements until now and said: “Once again, we call on all the people of Afghanistan, especially women, to provide full support to women’s demands and civil protest movements until achieving their goals and ideals.”