Women in Samangan: “Compatriots, Wake Up!” 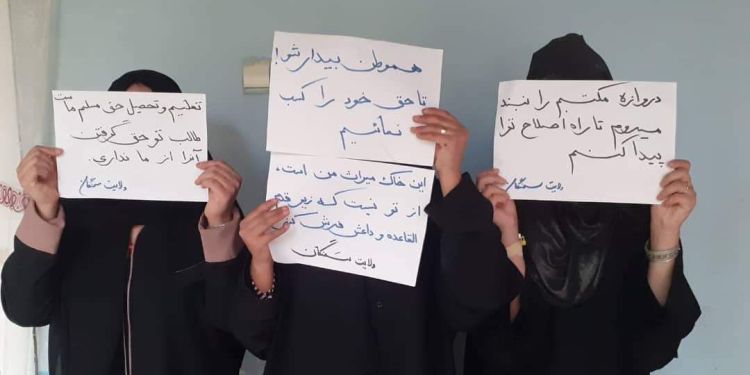 A number of female protesters in Samangan province have asked the citizens to fight against the Taliban group.

The Spontaneous Movement of Fighting Women of Afghanistan announced that the members of this protest movement protested against the Taliban yesterday (Tuesday, 16, August) in Samangan Province in a civil gathering and called citizens to fight against this group.

On the first anniversary of the fall of Afghanistan to the Taliban group, massive protests against the Taliban were held inside and outside the country.

Now, the women in Samangan province have demanded the reopening of girls’ schools and warned citizens of rolling out of Afghanistan under the feet of ISIS and Al-Qaeda terrorist groups.

These women have asked the citizens to “compatriots wake up!” to get our rights.”

They also said to the Taliban group: “this land is our heritage, it is not yours (Taliban) to roll out like a red carpet under the feet of ISIS and al-Qaeda.”

Referring to the closure of girls’ schools by the Taliban, the female protesters in Samangan also said: “Education is our inalienable right, you cannot take it away from us.”

This is while several movements protested misogynistic policies and violation of human rights by the Taliban across the country as well as in the countries of the region, Europe, the US, and Australia last week and called for global solidarity to save the people of Afghanistan from the oppression of the Taliban.