Women Protested Against the Taliban in Helmand 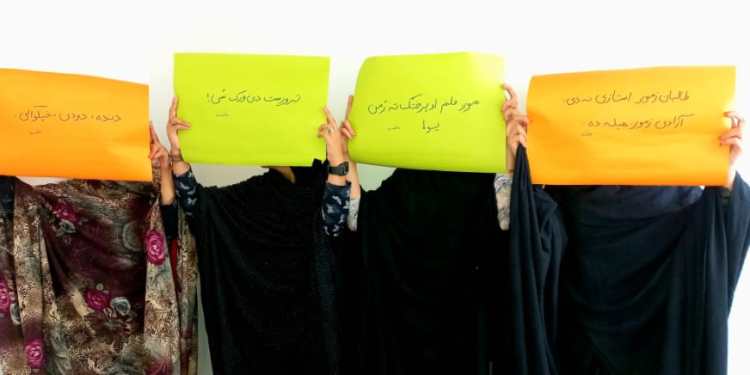 Several women protested against the Taliban group in Helmand province.

The Spontaneous Movement of Fighting Women of Afghanistan announced that the members of this protest movement protested against the Taliban yesterday (Tuesday, 16, August) in Helmand Province in a civil gathering and chanted the slogan “Food, Work, Freedom”.

The Spontaneous Movement of Fighting Women of Afghanistan has posted on its Facebook saying that the female protesters of Helmand gathered in a closed place and expressed their loathing of the restrictions and exclusion of women by the Taliban.

The pictures of this protest show that the protesting women raised placards and chanted the slogans “Food, Work, Freedom”, “Down With Terrorism” and “Taliban is not our representative, we want freedom”.

The female protester in Helmand has also demanded the right to education and advancement for women.

Helmand province used to be one of the important military bases of the Taliban in the face-to-face war between the Taliban and the former government forces, and many people were killed and injured in this province by the Taliban.

Women were denied the right to work and the right to education, as well as access to health services as the main victims of the Taliban war.

Now, on the first anniversary of the fall of the country to the Taliban group, a number of female protesters from Helmand have joined the protest movements against the Taliban and are determined to fight.