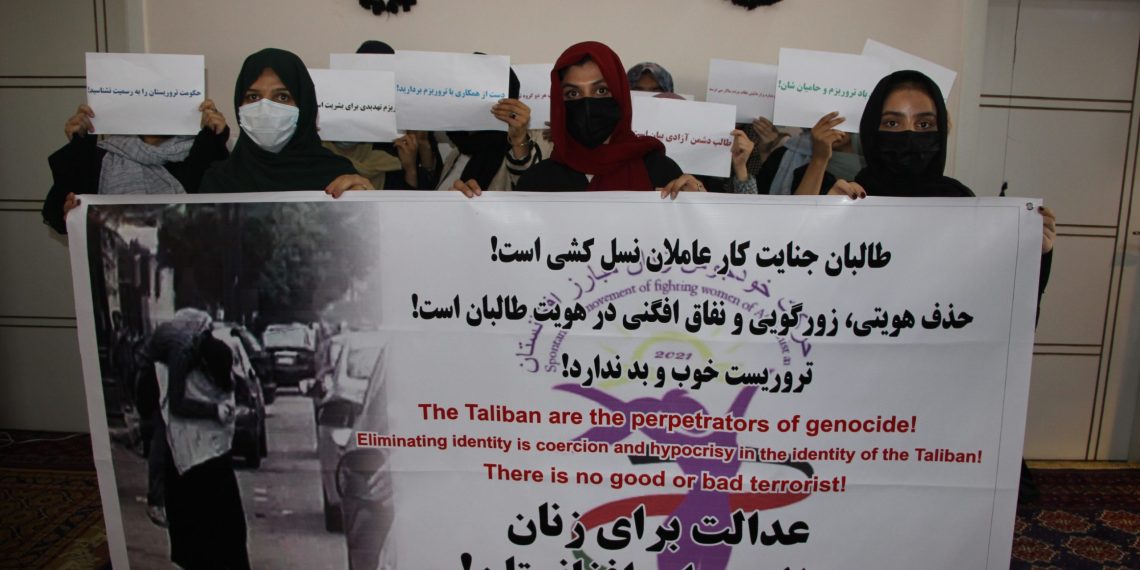 An Afghan women’s protest movement, criticizing the policy and the way the international community interacts with the Taliban group, says there are no good or bad terrorists and don’t cooperate with any of them.

Today (Friday, 19, August) by holding a civil gathering in a closed place in Kabul and issuing a resolution, the Spontaneous Movement of Fighting Women of Afghanistan has asked the international community to “stop cooperating with terrorism.”

This women’s protest movement says: “There is no good or bad terrorist, the Taliban and al-Qaeda are both terrorist groups and terrorism is a threat to humanity.”

These female protesters have also emphasized to the international community not to recognize the Taliban group as the “government” in Afghanistan.

The Spontaneous Movement of Fighting Women of Afghanistan said that although the US, some countries, and international organizations are playing multi-dimensional games with terrorists, female protesters still hold lawsuits and protest programs for justice to motivate the Afghan nation.

This protesting women’s movement says that the US and some other governments “in a double game between terrorists, make one the ruler of the Afghan people and make deals with them and kill the other.”

Female protesters have protested against the categorization of terrorists into good terrorists and bad terrorists, saying, “What kind of game is this? they welcome terrorists who are on the UN blacklist by rolling a red carpet under their feet. The leaders of the Haqqani network and the Taliban group, in general, are terrorists and they are no different to Ayman al-Zawahiri, the leader of al-Qaeda who was killed by the US.”

This is while after the Taliban group came to power on August 15th of last year, about one billion US dollars from the aid of the international community has somehow been made available to the Taliban group. Until now, Human Rights Watch is one of the organizations that has repeatedly warned the international community that instead of cash aid flowing in without a transparent mechanism and well management of these funds, sanctions should be imposed on foreign trips and Taliban leaders’ access to Afghanistan’s financial resources.