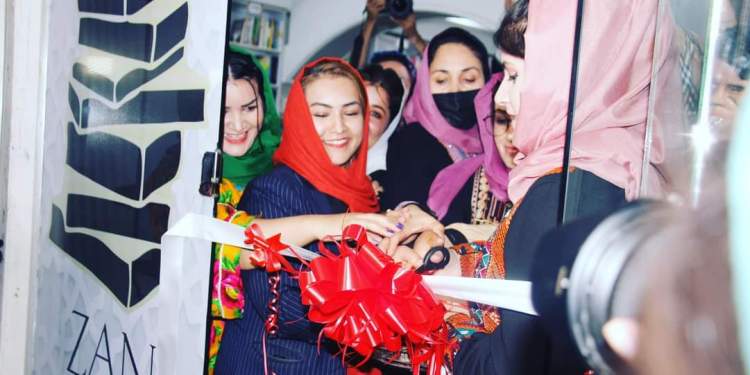 Spontaneous Movement of Protesting Women of Afghanistan opened the “Zan Library” as part of their campaign against the Taliban group and in defense of women’s right to education.

This library was set up in Kabul city yesterday (Wednesday, 24, August) while the Taliban increased their restrictions against women.

A number of domestic and foreign media as well as members of protesting women’s movements were present at the opening ceremony of this library.

The founders of this library published an announcement saying this library was opened as a cultural activity in defense of women’s right to education and as part of women’s campaign and resistance programs against the Taliban.

The spontaneous Movement of Protesting Women of Afghanistan has established this library with the financial cooperation of the Crystal Bayat Foundation.

The announcement of this movement states that the purpose of opening this library is to “grow and strengthen the culture of reading among women and provide free books for girls and women who do not have the financial ability to purchase books or are deprived of work.”

Referring to the returning of the Taliban group with their discriminatory and misogynistic policies, these women said that “August 15, 2021, marked a black day in the lives of the people of Afghanistan, especially women and girls. Excluding women from public life is the first and most prominent order of the Taliban after they took over the country. This included depriving female students of education and closing the doors of schools that educated women and girls.

But, these protesting women emphasize the fight against the Taliban and efforts to strengthen women’s educational programs.

According to the founders of the Zan (Woman) Library, this library is led by prominent members of the protesting women of Afghanistan to “ensure the presence of women in public life through the book and scholarly struggle.”

The Spontaneous Movement of Protesting Women has said, “Although the Taliban are trying to silence and exclude women from society, these activists want to resist with different methods, especially promoting the culture of study and improving the level of women’s knowledge, and prevent the exclusion of women from various fields of life by the Taliban. They want to become the pioneers of the struggle for the liberation of the Afghan women’s society.”

I went to Mazar-e-Sharif to attend the Kankor Exam preparation courses. As a schoolgirl, I dreamed of studying medicine to...