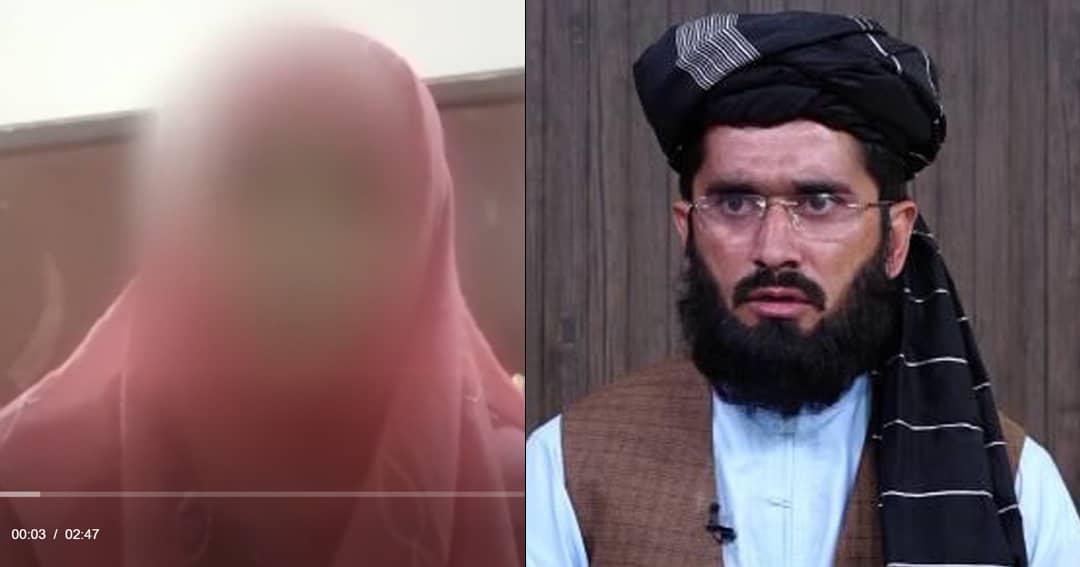 Yesterday, videos of a 24-year-old woman named Elaha became viral on social networks, in which she narrates everything from insults and humiliation to forced marriage and the violence of Qari Saeed Khosti, a Taliban official.

Elaha Delawarzi, who is a medical student at Kabul Medical University and the daughter of one of the security commanders of the former government, says that she was arrested by the Taliban intelligence at a checkpoint in Jan for having photos of former security soldiers on her mobile phone, but in the Taliban prison, Qari Saeed Khosti, the former spokesperson of the Taliban’s Ministry of Interior, who went to record a video of the prisoners, assaulted her and forced her to marry him there.

Elaha says: “A Taliban religious scholar made our marriage contract and asked him to teach me the Quran because I had become an apostate (in their opinion) during the republican era, and Qari Saeed should also take me to the Hajj pilgrimage.”

According to Elaha, after the forced marriage in prison, Qari Saeed Khosti went to Elaha’s father’s house with a group of armed people to propose and threatened her family not to oppose the marriage.

Although the marriage of Elaha with Qari Saeed took place in the Taliban prison, in June, a wedding ceremony was held for Elaha in one of the hotels in Kabul city.

Elaha says: “To show others that our marriage is not compulsory, he arranged a wedding ceremony for me in June.”

In her videos, Elaha says that she was tortured every night by Saeed Khosti with a cable and a knife, then she was raped. She shows the injuries on her body in front of the camera.

Elaha’s escape from the torture of this Taliban official also failed. She says that she was identified by the Taliban at the border of Torkham and returned to prison, but Qari Saeed Khosti took her back to his home.

Elaha claims that she is now imprisoned in one of the residential blocks in Kabul. By publishing her videos, she asked for help and to save her life.

Before, Saeed Khosti called the issue of Elaha a fictional story and said that he does not know a girl named Elaha, but this morning he confirmed his marriage to Elaha in a series of tweets.

He tweeted: “I married her six months ago at her request, but she was disbeliever, and I tried to guide her through conversation, but she insulted the holy things and I divorced her. I neither beat her nor tortured her.”

But the photos of the wounds on Elaha’s bloody body confirm the truth of the matter.

Qari Saeed Khosti, the former spokesman of the Ministry of Interior of the Taliban, who is now in charge of the orphanage of the Haqqani group, one of the branches of the Taliban, lives in one of the provinces, and in his absence, Elaha got access to a  smartphone and shared the films and documents related to the cruelty and torture of this Taliban official with media.

After Saeed Khosti confessed to his forced marriage, a number of protesting women say that now this Taliban official is planning to kill the Elaha for the crime of insulting the sacred and to cover up his barbaric crimes.

In a space on Twitter, the protesting women described the bravery of Elaha’s revelation of the Taliban’s violence and cruelty against women and asked human rights institutions to save Elaha’s life.