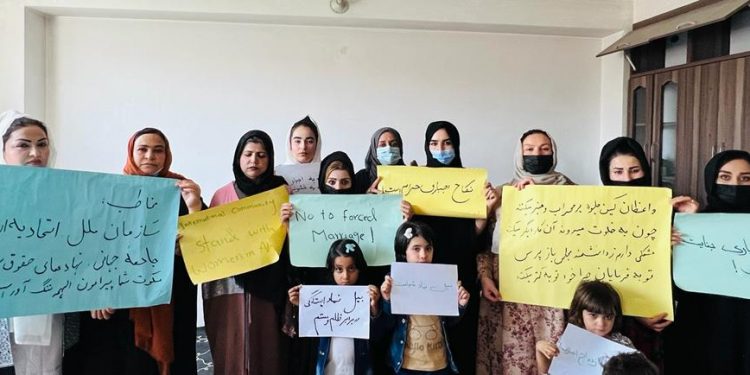 Some female protesters expressed their concern about the increase in forced marriages of girls under the domination of the Taliban and called the silence of human rights institutions shameful in a protesting gathering.

The members of the Women’s Unity and Solidarity Movement gathered in a closed place on Friday, 2, Sep and demanded to pursue the perpetrators of the rape of Elaha Delawarzi, one of the victims of rape, violence, and forced marriage by a Taliban official.

They called the silence of human rights institutions on Elaha’s issue and other girls who were victims of forced marriages shameful and demanded the prosecution of the perpetrators.

On the placards of the protesting women, the slogans “No to forced marriage” and “Forced marriage is a crime” were written, and they also wrote to the United Nations, the European Union, and the international community, “Your silence regarding the situation of Elaha is disgraceful.”

So far, Human Rights Watch and the Office of the United Nations Assistance Mission in Afghanistan (UNAMA) have expressed concern about the fate of Elaha Delawarzi.

But, these female protesters demanded practical measures to save the life of Elaha and asked the human rights institutions to save Elaha.

Elaha Delawarzi, 24 years old, was a student of medical sciences at Kabul Medical University and the daughter of a security official of the previous government, who was arrested by the Taliban last winter and was forcibly married in prison by Saeed Khosti, the former spokesman of the Taliban’s Ministry of Interior.

A few days ago, she demanded immediate attention for her life security by publishing videos on the Internet, she also claimed she has always been sexually assaulted and tortured by Saeed Khosti.