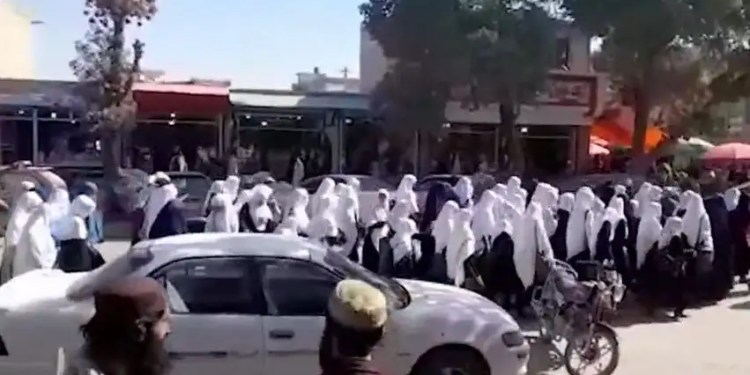 Girl Students Marched Against the Taliban in Paktia

Girl students marched for the reopening of schools and against the discriminatory and misogynist policies of the Taliban group in Paktia.

Dozens of female students protested today (Saturday, 10, Sep) in the city of Gardiz, the capital of Paktia province, against the “restrictions of the Taliban group on women’s education”.

The pictures and videos of the protest scene spread on social networks, shows that they are marching for their right to education.

Last week, five girls’ schools were opened in Gardiz city and Samkani district of Paktia, where girls from sixth to twelfth grades went to school.

Khaliqyar Ahmadzai, the head of information and culture of the Taliban group in Paktia, said that these schools were opened at the request of the people by the school administrators.

Zabihullah Mujahid, the spokesperson of the Taliban group, said that this is not the decision of the Taliban leadership and we are investigating who allowed the Paktia girls to go to school.

According to reports, these schools were closed by the Taliban again.

Now the female students in Paktia have protested against this gender discrimination and misogynist policy of the Taliban and want to reopen all girls’ schools across the country.

Last year, after the occupation of Kabul, the Taliban group issued several decrees to limit the living areas for women, the first decrees of this group included banning women’s education, depriving women of the right to work outside the home, and mandatory hijab.