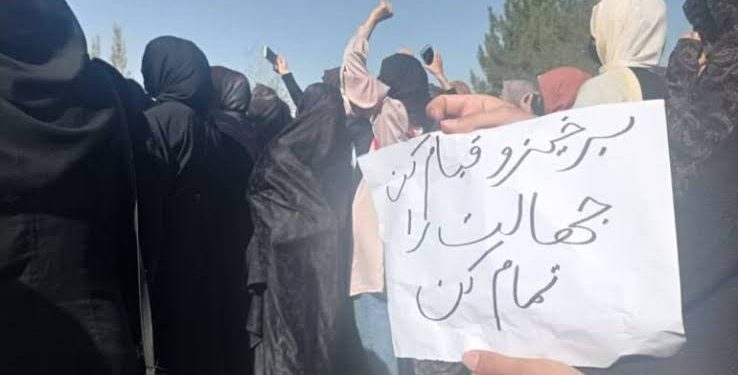 Reliable sources confirmed to Nimrokh that the fighters of the Taliban group suppressed the demonstration of the female students of Herat University by shooting and beating the protesters.

This demonstration started this morning (Sunday, 2, Oct) in Herat University to condemn the terrorist attack on the Kaj educational center in the west of Kabul, and the protesters demanded an end to the “Genocide of the Hazara”.

Sources confirmed to Nimrokh that when the protesters arrived in front of the Herat University of Education, Taliban fighters attacked them, beat the protesting girls, and arrested some of the boys who were accompanying them.

One of the protesters told Nimrokh that the Taliban fighters beat her with the bottom of a gun several times and broke her cell phone.

She added that the Taliban fighters dispersed the protesters by firing bullets and chased the protesting girls inside the alleys and houses.

Another protester also told Nimrokh that when I shouted that I was “the voice of Marziya”, one of the victims of the Kaj educational center, the Taliban fighters attacked me and silenced my voice.

Yesterday, the Taliban also suppressed the demonstration of female protesters in Kabul with gunfire and violence.