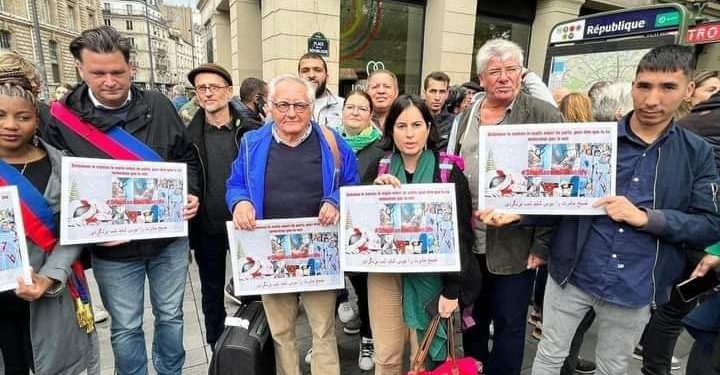 Afghan immigrants in different cities of the world started protest demonstrations and demanded to stop the genocide of Hazaras in Afghanistan.

In these protests, they condemned the terrorist attack on the Kaaj educational center in the west of Kabul and demanded the identification and judging of its perpetrators in international courts.

These protests have been held in the cities of Toronto, Canada, Berlin and Dusseldorf, Germany, Paris, France, Oslo, Norway, and some other cities around the world.

Protesters in these gatherings declared that they are deeply worried about the spread and continuation of attacks on Hazaras.

This demonstration was accompanied by several citizens of other countries of the world and they declared their solidarity with the people of Afghanistan.

In a declaration published by the protesters in the city of Toronto, Canada, the United Nations is asked to create a commission to investigate the genocide of Hazaras in Afghanistan.

These protesters have also asked the United Nations Security Council to hold a special meeting to investigate the attack on the Kaaj educational center and to take the necessary measures to prevent the repetition of such attacks.

Protesters in Canada have asked the International Criminal Court to intervene closely, investigate, document, and take appropriate measures to recognize the genocide of Hazaras and prevent its repetition.

They have also asked the international community and the Canadian government to support the investigation into the genocide of Hazaras in Afghanistan and the prosecution of its perpetrators at the International Criminal Court.

These protesters also demanded immediate support for the families and survivors of the attack on the Kaaj educational center.

The attack on the Kaaj educational center in the west of Kabul was one of the deadliest attacks on Hazaras in the past year since the Taliban took control of Afghanistan.

According to the statistics published by the Office of the United Nations Assistance Mission in Afghanistan (UNAMA), the identities of 43 dead and 83 wounded have been confirmed so far.

But reliable sources confirmed to Nimrokh last evening that they have established the identity of 53 dead and 106 wounded.

Most of the victims of this attack are female students between the ages of 15 and 20, who were taking a sample exam in this educational center.