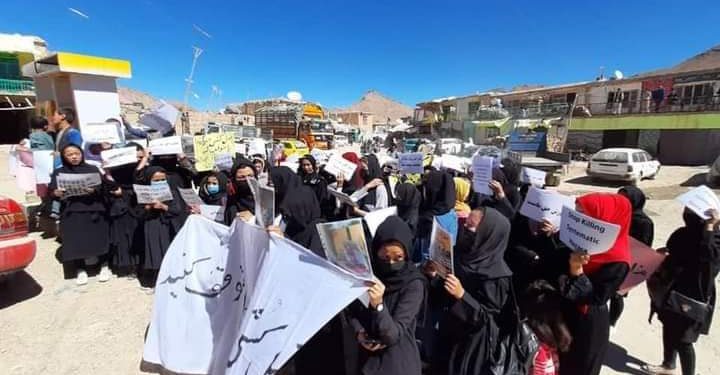 Many girls and women in Malestan and Jaghori districts of Ghazni province, according to the terrorist attack on the Kaj educational center in the west of Kabul, demanded to stop the genocide of Hazaras.

Today (Thursday, 6, Oct), they condemned the attack on Kaj educational center by launching separate marches in these two districts.

These marches were started by young women and girls in these two districts and several female students also participated in it.

The protesters demanded an end to the genocide of Hazaras in Afghanistan by chanting the slogans “Stop Hazara Genocide” and “Being a Hazara is not a crime”.

They also chanted the slogans “Open girls’ schools” and “Education is our right” and demanded the reopening of girls’ schools above the sixth grade.

After the terrorist attack on the Kaj educational center in the west of Kabul and killing and injuring more than 160 students, large-scale demonstrations to condemn this attack and to stop the genocide of Hazaras have been held in different provinces of the country and different cities of the world.

Inside the country, protests against the attack on the Kaj educational center and the genocide of Hazaras have been held by women, and in most cases, Taliban fighters have suppressed these protests with gunfire and violent treatment.