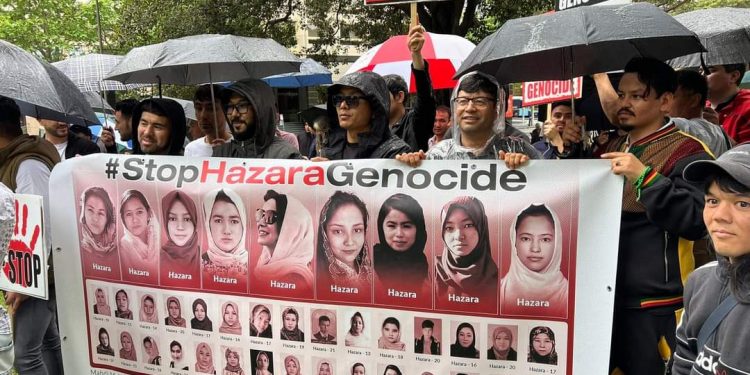 The global campaign to stop the genocide of Hazaras published a joint resolution from about 100 cities of the world demanding their most important requests in the form of five issues including the recognition of the genocide, impartial investigation, the prosecution of the perpetrators of the genocide, the creation of an internal security system and support for the Hazara immigrants.

Today (Saturday, October 8, 2022), these protesters are holding civil gatherings in various Asian cities, European countries, the US and Canada, Australia, and also inside Afghanistan.

In a resolution published by the Coordination Committee of the Global Campaign to Stop the Genocide of Hazaras, the international community is seriously asked to investigate the Genocide of Hazaras, to recognize the targeted and continuous killing of Hazaras as genocide, and to identify and persecute the perpetrators of this crime. Also, support and monitor self_guarding to protect Hazara people.

The genocide of Hazaras must be recognized;

A fact-finding committee should be formed to record the dimensions of the genocide of Hazaras in Afghanistan;

They also asked the United Nations to “form a fact-finding commission to search and investigate the genocide of Hazaras, and this commission should start working soon.”

The security of Hazaras should be ensured by themselves with international support and supervision;

Ensuring the security of the Hazaras to themselves is one of the plans proposed by the protesters to the international community to help eliminate security threats and prevent the massacre of the Hazara people.

The global campaign to stop the genocide of Hazaras has asked the United Nations, the international community, especially the United States of America, the European Union, and other countries involved in Afghan affairs to “take practical and urgent measures to protect Hazara people” and It is specifically proposed to “establish a system of internal protection with international assistance and supervision” and to address the victims and survivors of the crimes of genocide.

The International Criminal Court should identify, prosecute and punish the perpetrators of the genocide of Hazaras;

The protesters have also asked the International Criminal Court to “start its investigations into the case of the genocide of the Hazaras in Afghanistan to identify, prosecute and punish the perpetrators of these crimes, and put the effective handling of this case on its agenda.”

The resettlement of Hazaras should be part of the priorities of immigrant countries;

Considering that the continuous crimes during the last one and a half-century and the increase in targeted attacks for massacre have displaced millions of Hazaras around the world, the protesters call on the international community and immigrant countries to “recognize the special situation and special vulnerability of the Hazara people in Afghanistan, which they have been subjected to discrimination, persecution, torture, and massacred for centuries, consider and make their resettlement a priority.”

This global campaign to stop the genocide of Hazaras has been launched after the recent suicide attack on the Kaj educational center in the west of Kabul.

The terrorist attack on Kaj educational center, which occurred on Friday, October, 1, targeted a kankor preparation class and left at least 56 students dead and 116 injured, the majority of the victims were teenage girls aged 15 to 18.

After this deadly attack, which was carried out by an armed suicide attacker, a widespread global campaign was formed, women and men protested and marched in the provinces of Kabul, Balkh, Herat, Bamyan, Ghazni, Daikundi, and Paktia. In social networks, especially on Twitter, the hashtag #StopHazaraGenocide was reposted nearly seven million times in a week and is still going on.