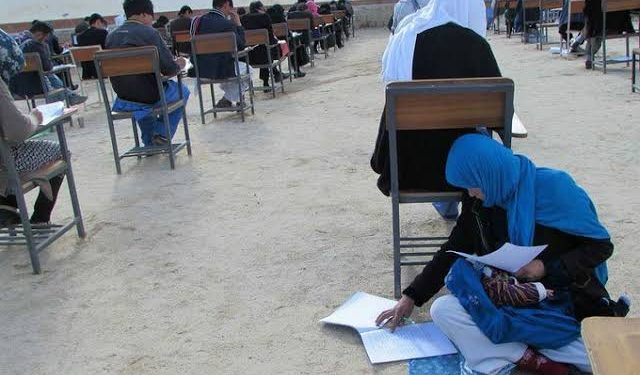 New Rationing on Entrance Exam; Restrictions on the Major and Place of Study

The Taliban terrorist group has imposed severe restrictions on the right of girls to choose their field of study and also the place of study in the first national entrance examination under their control.

The city of Nili in Daikundi province hosted hundreds of boys and girls with big dreams during the national entrance examination every year. They rode motorcycles or took taxis to reach the city center from distant villages. They expected to see their twelve years of effort, sleeplessness, and dreams. But this year, this city not only did not have the previous enthusiasm but also the participants in the entrance exam had decreased significantly.

On the other hand, based on the new restrictions imposed by the Taliban group on the education of girls, participants faced restrictions in choosing their field of study and place of study.

Nazifa tells Nimrokh that she is interested in journalism, but on the day of the exam, she realized that her favorite field was not on the list. She asked the exam giver and found out that she could not choose Journalism.

Nazifa says, “After hearing the words of the observer who said in the exam scene that some courses have been removed and the rest of the courses and code numbers have been given to you, make sure you don’t make a mistake, I was shocked. The first field of study that I wanted to choose was journalism. But I had no right to choose it. I didn’t understand what happened anymore, I was just crying and checking correct answers.”

Nazifa says that now she is not even sure if she will succeed in this test or not. But she expects to be able to at least study literature.

Based on the new restrictions of the Taliban terrorist group on women’s education, female candidates for the entrance examination have no right to choose journalism, veterinary medicine, economics, agriculture, and mining exploration engineering.

The Taliban have not only limited the fields for girls, but have also imposed restrictions on the choice of the place of study, and candidates for the entrance examination of each province are forced to study in the universities of the same zone.

18-year-old Zahra was another participant in Daikundi who came to Nili city from Eshterli district. She told Nimrokh that she left the exam scene disappointed and upset because she was not free to choose her field of study.

It is worth mentioning that Ashraf Ghani Ahmadzai, the former president of the country, had imposed severe restrictions on the access of entrance exam participants to education based on a rationing plan. Based on his plan the criteria to enter universities of the country were the place of living and ethnicity.

Before the takeover of the Taliban group, there were more than 4,000 applicants for entrance exams in Daikundi every year, and half of the applicants were girls.

The coronavirus outbreak, drought, and then the domination of the Taliban over the country hurt the economic situation of the people of Daikundi. Due to poverty, most families could not send their sons and daughters to school and exam preparation schools. Besides migration, a large number of 12th-grade teenagers were forced to drop out of school due to poverty. Therefore, the number of entrance exam participants has decreased drastically.