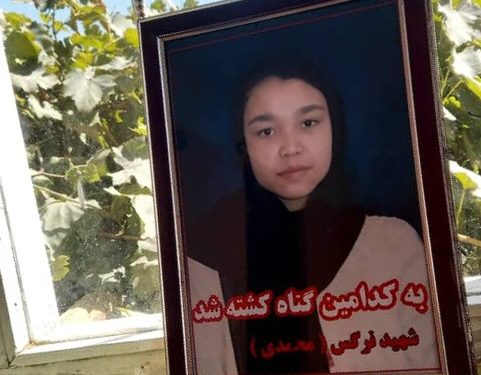 Narges was 18 years old and from Miramor district of Daikundi province. When she was 9 years old and in the third grade of school, her family moved from Daikundi to Herat province.

Sakhidad Mohammadi, Narges’ father, told Nimrokh that because of his daughters’ passion for education, they went to Herat Province so that his children could have access to education. Because Daikundi is one of the most deprived provinces of Afghanistan, and in most villages of this province, children do not have access to educational services. Mr. Mohammadi provides for the needs of his nine-person family by doing hard and overwhelming work so that his children can study.

Six years later, Narges moved with her family once again after finishing elementary and secondary school in Herat. This time to Kabul. Narges was looking for the best school to continue her high school until she entered Zainab Kobra governmental school. Zainab Kobra Girls’ School is located in Dashte Barchi tank station in the 13th district of Kab city. In the spring of 1401, Narges entered the Kaj educational center to prepare for the national entrance exam. She had not scored less than 330 after participating in the sample tests many times and was preparing to enter the medical field.

Narges’ father says that she was studying all day and night in a room alone. Recently, when the security situation in Kabul became alarming, her father prevented Narges from going to school many times, but Narges was not convinced. Narges’ father says: “When we said that the number of suicide attacks has increased, don’t go to educational center anymore, she replied that I don’t have much time and I have to get ready whether the security improves or not, I have to get ready, I will become a doctor or be killed!”

Finally, on 1, Oct, Narges died in a terrorist attack on Kaj educational center.

Narges’ mother says that the night before the incident, Narges was very excited and stressed because it was the last sample test she was passing. She told Nimrokh: “Narges told her sister’s husband to go to Kabul Polytechnic University after passing the exam so that she can get familiar with the atmosphere there.”

That night passed and early in the morning, Narges’ father woke up with a phone call saying: “There has been an explosion at Kaj educational center and where is Narges?” Narges’ father also says that his daughter went to Kaj educational center early in the morning and then calls his daughter’s phone, but someone else answers and says: “It’s not Narges, her phone was left at the explosion site, who are you?”

Sakhidad Mohammadi, Narges’ father, mother, and sisters go to the Kaj educational center one by one, but the Taliban do not allow them to approach the place. They search Watan Hospital and several other hospitals, but they cannot find any sign of Narges and finally, they go to Mohammad Ali Jinnah Hospital.

There, the Taliban do not allow families to enter to find their children and drive them away with intimidation and violence.

One of Narges’ sisters enters the hospital and looks for Narges among the wounded girls, and Narges’s restless father calls her repeatedly asking if she has found Narges or not. She says that Narges was not among the wounded girls, and then she goes to the dead bodies of the girls, most of whom could not be identified, and she goes through a row of bodies one by one, but Narges is still not there, and finally, the dress of one of the last two bodies in the last row looks like Narges. She finds her with a bloody dress, a face full of dust, and a broken hand, and in response to her father’s call, she cries and says, “Your daughter was denied her dream, she said either I will study to become a doctor or I will be killed.”

After hearing this news, Narges’ father fainted and with the help of his sons, they return home with Narges’ body. Narges’ father says: “At that time, my heart almost stopped. I could not digest the news of her death. I had raised her by working hard, she had great dreams, but they were all destroyed in a blink of an eye”

Narges was one of the best and elite students of Kaj and had the first grade in the school. On the day of the incident, she was sitting in the first row of the class when a suicide bomber attacked the educational center and blew himself up among the girls. Narges’ right hand was broken, a large part of her right side and eyes were cut out, and a bigger wound was only on her forehead, but Narges’ clothes were stained with the blood of her other friends.

Sharifa Joyanda, another sister of Narges, says that the last image she has of Narges is very painful: “When they wanted to wrap Narges’ lifeless body in a shroud, Narges’ face was shining white like moonlight and maybe she was saying don’t bury me, I’m still very beautiful and young.”

Now, a room full of school books, exam papers of sample entrance exam preparation, certificates of appreciation and school bags are all left behind by Narges for her parents.

While Narges was preparing for medicine, when she got tired of studying, she read poetry, and by reading poetry, she relieved her mental fatigue.

The poetry book Kissing the Bee by Sohrab Sirat, a young Afghan poet, and the collection of poems You are not one to come back by Farhad Farahmand are also among her books.

On the day when Narges was going to take the last sample exam, she had taken a smaller bag to put her pen, paper, and mobile phone. After the incident, Narges’ mobile phone is switched off and her bag and other belongings have also disappeared and have not yet been returned to her family.

The youngest son of the Narges family is also a student of Abdul Rahim Shahid School, which was the target of two explosions a few months ago, but Narges’ brother was not at school on the day of the explosion. However, he suffers from the shock of that explosion and has left school for a while until he gets better.

Narges’ mother says that on the day of the explosion at Abdul Rahim Shahid’s school, her son was sleeping after eating suhoor in the month of Ramadan and told his mother to wake him up to go to school, but his mother had forgotten and when her son woke up that it was late to go to school. and he also refused to go, and at noon of the same day, a huge explosion occurred at the exit gate of the school, killing 40 students and injuring 70 others.

Now Narges’ mother wishes that Narges would have not to woken up that day and not gone to the educational center. But the young and beautiful Narges, along with the other victims of the explosion of Mawod and Kaj are resting under the ground at the foothills of Kabul’s Ghorigh mountain.