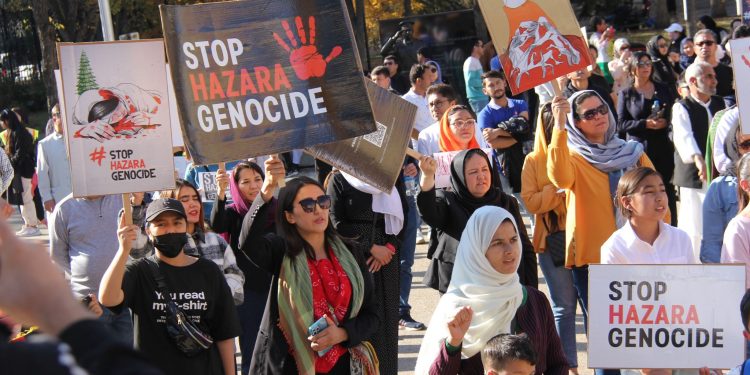 Following the global campaign to stop the genocide of Hazaras in Afghanistan, hundreds of protesters in the city of Calgary, Alberta, Canada, in a civil gathering, asked the international community to take practical action to end this horrible crime.

Yesterday (Sunday, 9, October 2022) protesters held a civil meeting and a march in the city of Calgary to demand an end to the genocide of Hazaras.

In this lawsuit program, which was following the protest programs held in more than 100 cities around the world, the protesters wanted to stop the genocide of Hazaras and asked the international community to get involved in a practical way to end this horrible crime in the country.

Protesters in the city of Calgary, Alberta, Canada called attacks such as the terrorist attack on the Kaj educational center “targeted, systematic and deliberate attacks”.

While publishing a resolution at the end of this meeting, they chanted the common slogan of this global campaign, “Stop Hazara Genocide!”

Millions of protesters from around the world joined together with the hashtag #StopHazaraGenocide to plead for Hazaras.  Citizens of countries in the region, Europe, America, and Australia also took part in this campaign.

Afghan immigrants in the city of Calgary from different strata of society without distinction of ethnicity, language, geography, religion, and gender; With unity and empathy, they all demanded to stop the horrible crime of genocide of Hazaras in Afghanistan, which was started by Abdul Rahman Khan in the 1890s and is still going on. They accused the Taliban group of being behind the majority of massacres of Hazaras, especially suicide attacks on educational centers in the west of Kabul, and this group, as in the previous period of 1996-2001, at least four times in Bamyan, Balkh, and Samangan massacred Hazaras, it is also responsible for the deadly suicide attacks and bloody explosions in the past twenty years, and now, for more than a year after the occupation of Kabul, they have launched massive genocidal attacks in the form of forced migration, suicide and mass killings against the Hazaras.

By publishing a resolution, these protesters asked the world to take necessary measures as soon as possible, such as recognizing the genocide of Hazaras, conducting an impartial investigation, prosecuting the perpetrators of the genocide, establishing a self_security system, and supporting the resettlement of the Hazara immigrants.

In the resolution of protesting immigrants in the city of Calgary, it is emphasized that the international community should consider the targeted and continuous killing of Hazaras as genocide to deal with this great problem of human rights in Afghanistan and to end this horrible crime that has been going on for more than a century and a half. Recognize, identify and punish the perpetrators of this crime, and implement and monitor the self_security plan to protect Hazaras.

They have also asked the United Nations to “form a fact-finding commission to investigate the genocide of Hazaras, and this commission should start working soon.”

Letting Hazaras ensure their security by themselves is one of the plans proposed by the protesters to the international community to help eliminate security threats and prevent the massacre of Hazara people.

To stop the genocide of Hazaras, these protesters have asked the United Nations, the international community, especially Canada, the United States of America, the European Union, and other countries involved in Afghanistan’s affairs to “take practical and immediate measures to protect Hazara people” and It is specifically proposed to “establish a self_protection system with international assistance and supervision” and to address the victims and survivors of genocide crimes.

In addition, the protesters also asked the International Criminal Court to “start its investigations on the case of the genocide of Hazaras in Afghanistan to identify, prosecute and punish the perpetrators of these crimes and put the effective handling of this case on its agenda.”

Considering that the permanent crimes during the last one and a half century and the increase of targeted attacks for mass killing have displaced millions of Hazaras all over the world, the protesters ask the international community and immigrant countries to “recognize and consider the special situation and special vulnerability of the Hazara people in Afghanistan, which have been subjected to discrimination, persecution, torture, and mass killing for centuries, and make their resettlement a priority.”

A global campaign to stop the genocide of the Hazaras has been launched after the recent suicide attack on the Kaj educational center in the west of Kabul. The terrorist attack on Kaj, which occurred on Friday, 1, Oct, targeted a national university entrance exam preparation class and left 56 students dead and 116 wounded, the majority of the victims were teenage girls aged 15 to 18.

After this deadly attack which was carried out by an armed suicide attacker, a global campaign was formed in the four continents of Asia, America, Australia, and Europe and more than 100 cities of the world on the 8th and 9th of October, as well as in the provinces of Kabul, Balkh, Herat, Bamyan, Ghazni, Daikundi and Paktia. In social networks, especially on Twitter, the hashtag #StopHazaraGenocide was reposted about eight million times a week and is still going on.