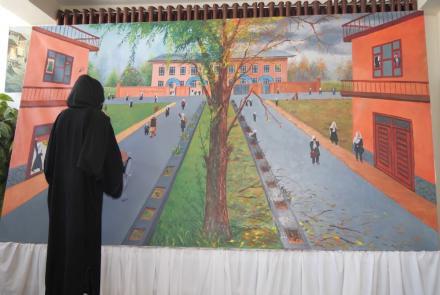 Some female students who are not allowed to go to schools due to the Taliban restrictions protested the closure of schools for girls above the sixth grade by painting a large board of a girls’ school.

These students say that through this painting, they want to express their protest against the exclusion of girls from education and going to school.

Ten female students, who were deprived of schooling due to the closure of schools for girls above the sixth grade by the Taliban group, painted this painting in 26 days.

Elaha, one of these students, told the media that we are worried about our future and that if girls’ schools remain closed, will we be able to achieve our dreams?

Leila, another student and one of the painters of this painting, said that we wanted to portray our voice and dreams through this painting.

Sayed Mohammad Nasir Hashemi, the head of an art school in Kabul, told the media that they have decided to hold an exhibition by collecting the paintings of other Afghan women to bring women’s voices to the world.

For over one year, the Taliban group has not allowed girls above the sixth grade to access education and go to school.

The United Nations has announced that due to this decision of the Taliban group, more than one million girls in Afghanistan have been deprived of education.