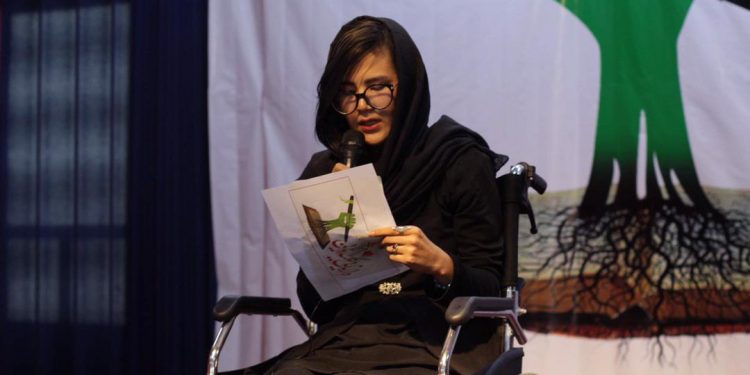 The tied fate of Nilofar and Shukriya, the girls who rose from the smoke and fire of war, is the story of the phoenixes that rose from ashes. Nilofar, the girl who was killed in the terrorist attack on the Kaj educational center, and Shukriya, the girl who is sitting in a wheelchair after the attack on the Mawod educational center on August 15, 2018, four years ago, feel a sense of kinship with all the victims and wounded of such attacks.

Shukriya saw Nilofar about three months ago during the anniversary of the terrorist attack on the Mawod educational center, which was held in the exam preparation class of the Kaj educational center. Shukriya was sitting in her wheelchair when she noticed a girl looking at her curiously and smiling. Shukriya greets her and Nilofar comes to her; she stands in front of Shukriya and shakes Shukriya’s hand, she tells Shukriya with a hoarse voice, “You are my role model to continue.” There was no pity in her eyes, and maybe deep down she envied Shukriya’s endurance and ability, how a girl endured despite that experience which is still with her.

These are two Hazara girls who have many common sorrows. After that day, Nilofar would call Shukriya sometimes. But again, the enemy of Hazaras blasted another educational center like Mawod. Now Shukriya cries for a girl whom she had seen once, but she felt they knew each other for several years and had a common feeling; The sense of deprivation of their mothers who could not study, but they try to provide an educational opportunity for their daughters.

Nilofar, a girl who was maybe 17 years old despite the school gates being closed on her and the future of her and her peers is going to be destroyed by a bloodthirsty group, still studies. This struggle did not last long when the ominous shadow of the enemies of knowledge and the narrators of ignorance spread on the pine trees( Kaj)of the west of Kabul, and Nilofar died in a suicide attack on the Kaj educational center. Now, her friend Shukriya who met once and is also a survivor of an attack on Mawod, hardly tells the story of what happened to her. What happened to Nilofar, Shukriya, and all the injured and killed students of Dashte Barchi is common; The difference is that Shukriya is alive and dies a thousand times for Nilofar and the other daughters of Kaj, Kawsar, Mawod, and the school of Sayed al-Shohada. Shukriya says that I am telling my story in memory of Nilofar, who did not get the chance to tell it. For the pain, she may have suffered and she could not tell her mother.

Shukriya Shagarf is a girl who rose from the fire of war and oppression 21 years ago and was growing. But this time, the fire of hatred and ignorance hit her, her classmates, and her fellow Hazara in the Mawod educational center. The girl who survived the suicide attack at Mawod educational center on August 15, 2018, in which more than 80 students were killed, although she survived but lost her ability to walk. Shukriya says firmly, “They harmed my legs, but they can never take away the ability to think and think beautifully, even by forcing death. We are the example of proud pines, no matter how many times our leaves are cut, we sprout again and find the way to reach the sun.”

Nearly five years ago, when Shukriya was studying in the 11th grade of school, on a hot summer day, which was the same as the holidays after her school exams, she decided not to waste time and to improve her preparation for the entrance exam, she signed up to restudy the subjects of sciences (mathematics, chemistry, and physics). She decided that the next year when she will be in the 12th grade, she will be able to get ready for the entrance exam easily. So, she chooses the Mawod educational center. When she goes to the Mawod, she realizes that the lesson time of the science basics of this educational center is the same as her school. That’s why she cannot enroll in the basic class.

In addition to school lessons, Shukriya was a member of the singing team that performed at scientific and social conferences. She had saved the money she received from the programs as an incentive to buy books, but she will have to pay for the registration. The lessons started and every day Shukriya walked forty minutes from the Haji Nowruz intersection to the Naqash station to the Mawod educational center energetically.

A week after the start of classes, 24 was a dark day when Shukriya and her classmates were targeted by the wave and shrapnel of the explosion in their classroom. That day, Shukriya and her friend Sima get ready earlier than usual to reach the educational center and suddenly decide not to walk, they use public transportation. Unlike previous days, they arrive at the educational center ten minutes earlier while the previous class has not yet finished, ten minutes later the class is empty. Shukriya and Sima sit in the third row of the class and Sabikeh, their other classmate, sits next to Shukriya. According to the usual arrangement of teaching time, physics was taught in the first hour of the day, and mathematics in the second hour. But that day, in the first hour of their lesson, the math teacher enters the class. As if everything was not going to go, as usual, Shukriya was not going to be able to stand on her feet the next day and Kawsar and Dawood were not going to be alive anymore.

The math lesson ends, Shukriya and Sima leave the classroom during the break time, and her classmates were solving their problems together because of the sample entrance exam that was supposed to be held on Friday, and most of them were in the classroom.

From the very first minutes of the day, she had a strange feeling, a feeling of restlessness, as if her subconscious had realized what was going to happen and was warning Shukriya to stay away from there. Is it possible to take a girl away from her classroom and make her stop pursuing her dreams?

The break time is not over yet, but on the hot summer days, Shukriya feels cold and asks Sima to go back to class. However, Sima doesn’t agree at first and says, “Wait, we have ten minutes left, then we’ll go back to class.” Sima quickly changes her mind and goes to class with Shukriya. When they enter the class, Shukriya sees her friend Kawsar for the first time in that classroom, who is sitting in the first row and wants to go to her, but she refuses to do so and greets Kawsar from a distance by waving her hand and smiles.

Shukriya arrives in the third row, where she was already sitting, and before sitting on a chair, she suddenly feels something explode inside her head and doesn’t hear anything, her legs are pulled off the ground and she falls to the ground a few rows behind.

The class gets dark and the smell of gunpowder and burns that day still terrifies Shukriya. Shukriya was taken out of the class by her classmates who were able to walk and were less injured. Shukriya still cannot talk about that day and what she saw. “Talking about that day annoys me,” she says when I ask her to give details. She is only able to write about the events she saw and express them in words. The power of the word can be felt here. Something that Shukriya and her contemporaries are looking for and never stop reaching. Words, reading, and knowing… something that never weakens.

When Shukriya was taken out of the classroom injured and shedding, she feels that her body falls to the ground in pieces along with the blood, and then she realizes that those pieces of organs and blood belongs to her classmates who were dismembered and fell to the ground. She does not faint and it is the images that she still remembers, in all their horror.

Shukriya is transferred to Watan hospital. When the doctors check the wounds on her hand, they noticed shrapnel that split Shukriya’s back and told her mother that she should be taken to the emergency hospital. Her health goes worse on the way to the emergency hospital. The ambulance driver is forced to take Shukriya to Aliabad Hospital. There, Shukriya’s condition becomes stable and a little later she comes across the burnt and torn bodies of her classmates. She sees Madina Laali who is on the other side in a coma and dies after a few moments.

After a few hours of waiting, it is Shukriya’s turn to undergo surgery. The next day, after the surgery, Shukriya feels that she cannot move her legs. When she asks the doctor why her legs won’t move, the doctor tells her that it may take years for you can walk again. Hearing this, the world of her dreams is destroyed in an instant and she cries for all the things she has not done and the paths she has not taken. A little later, she realizes that Kawsar has been killed. She doesn’t believe and thinks that Kawsar was several people away from the place of the explosion, but Kawsar was killed by the bullet that hit her throat at the very beginning of the explosion.

Two days later, in the emergency room of Aliabad hospital, Shukriya, Dawood, and Abulfazl were among the wounded from that explosion. Dawood, with his body, burned, his leg broken in three parts, and still missing one eye, asked his father, “Dear father, did you pick up my books ?” “When I get better, I will go back to the class.”

Dawood hoped that he could still study with one eye. Due to the lack of facilities and the carelessness of Aliabad hospital officials, he got an infection in his leg and his family was forced to transfer him to the Emergency hospital. There, when they want to anesthetize Dawood to amputate his leg after that Dawood will not wake up again, he will die under the surgery.

But here in Aliabad hospital, Shukriya’s surgery was not successful and out of the ten bullets that entered Shukriya’s body, the doctors could remove nine of them. They cannot take out a bullet that entered the spinal cord. After seventeen days and getting a visa, Shukriya will be transferred to India. Having performed two surgeries in India, due to the injury and the long stay of the bullet in the spinal cord, Shukriya has not been able to walk on his feet and is still training.

After that incident, Shukriya gets better and when she can sit, she goes to her school and passes her annual exam. “I couldn’t accept that I couldn’t do it anymore, I took the test to prove myself and I was able to continue,” she says of the sense of invincibility she felt at the time.